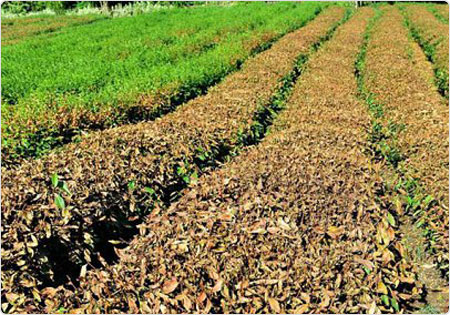 Hangzhou has been under a subtropical high-pressure belt from July. This city experiences the continuously hottest weather in years at the temperature over 40℃ for several days. Worsely, being lacking of rainfalls, tea trees in the Xi Hu Long Jing Tea Garden is burnt and dried up by the sun. According to the staff in Agricultural Bureau of West Lake Scenic Spots, the high temperature will last for a period of time. But the inevitable consequence is resulted that the output of 2014’s Long Jing Green Tea will definitely been decreased, especial LongJing Number 43. 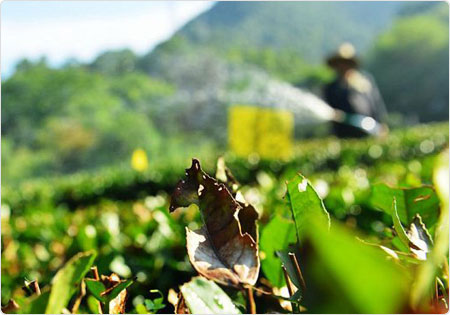 LongJing Number 43 is artificially cultivated from current LongJing tree species by the Tea Research Institution of Chinese Academy of Agricultural Sciences. This specie is suitable for making green tea and black tea, especially for making high quality flat green teas. It fits to the growing environment in areas at middle and lower reaches of Yangtze River. 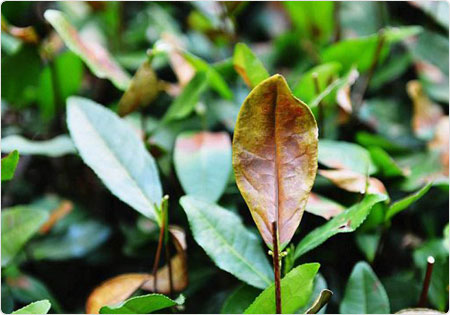 Back in early July, the tea trees in Shuangfeng Village and Lingyin areas began to sicken, which are low altitude areas. Tea leaves were dried even withered under strong sunlight. Till the end of July, the drought began to affect tea gardens nearby, including Meijiawu, Fancun, Jiuxi, Wenjiashan.

Usually if temperature rises to 35℃ (95℉) or higher, the tea trees will be affected. In Hangzhou, it sustained a high temperature over 38℃ (100.4℉), which destroyed the cells in leaves, branches, and even roots. Irrigation is the prior method the farmers will take for fighting with the drought. But now even they water the trees every day, the withered leaves will not survive. Shang Jiannong, the chairman of Xihu Long Tea Industry Association of Hangzhou, told the reporter that next year’s spring tea will reduced by 20 to 30 percent. What’s worse, this drought’s influence on the tea industry of Hangzhou will continue for at least 3 years.

Tea farmers in Lingyin Village, Hangzhou said:”the leaves were all green and tender. These days’ sunlight baked them into yellow. Yellow leaves are useless.” 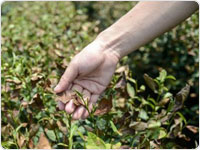 In the tea gardens in this Village, the tea leaves rolled up because of dry, and became so fragile that a small touch can break it. Not only the tea farmers in Lingyun are hoping rainfalls and a falling temperature, but also the farmers in other places of Hangzhou. They worry that if the hot weather continues, it will be much worse.

2013’s spring teas were already harvested. However, next year’s output will definitely be affected since most tea trees are injured badly by high temperature. Tea farmers felt helpless. They could do nothing but only water their tea trees.

A researcher from the Tea Research Institution of Chinese Academy of Agriculture Science advises that the best way is to shade the trees with a shield. Plant some other higher trees near around can also protect tea trees from sunlight. 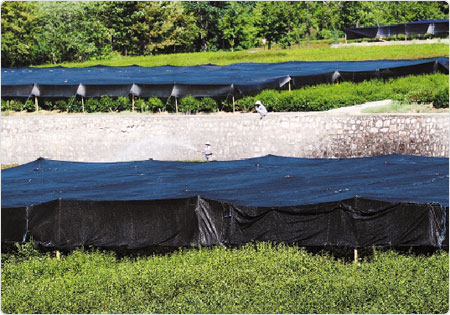 Besides, specialists suggested the farmers to place some straws on the ground. Straws can reduce the heat radiating to the tea trees from ground. For the injured tea trees, it’s better to left them untreated. Do not cut the dried leaves and branches until the hot weather goes away. Avoid irrigation at high temperature during a day; otherwise the tea leaves will be burnt again.

How Hot Was It In Hangzhou?

According to the reports from China Meteorological Administration, the temperature in Fenghua, Hangzhou reached the highest of 42.7℃ (116.9℉) on Jul 25th. Meanwhile the temperature in Hangzhou, Ningbo and Shaoxing stayed high for over 40℃ (104℉).

In July and August, the heat swept several eastern provinces in China. Anhui, Hunan and other provinces are affected.

- In Zhuzhou, Hunan, nearly 30% tea trees in more than half of the cities’ tea gardens are died.

- In Anhui, areas affected by the drought are spreading. Rainfalls of the last month in southern mountainous area in Anhui Province are 70% less than former years. Till Aug 6th, about 57 million acres of tea areas are affected.

On high mountains, there is less direct sunlight during a day, as well as lower temperature. Therefore high mountain tea trees are less affected by the heat than low altitude teas.

Newly planted tea trees have young root, which grows shallow in the earth. But the trees older than 5 years have strong and deep roots, can absorb water in soil. Thus they could survive.

Longjing No. 43 is a new cottage specie, has shallow roots mostly in 20 cm to 30 cm long. In hot weather, water in the ground’s surface evaporates quickly. The trees cannot get water from deep soil, and finally die.

An old specie – Longjing bulk-populationbreeding specie – grows roots by seeding. The root can be longer than 1 meter. The capability of absorbing deep soil water helps the tree fighting with drought.

Next Year’s Tea May Have Appearance Affected

As tea farmers irrigated the trees in time, most tea trees can survive the drought, and can produce new teas in next year. Even if some trees were badly injured, they can still recover in two or three years. But it is certain that 2014’s spring Longjing tea will rise in price. Yet how much the output will be reduced depends on how long the drought will last, how bad it will be, as well as on how much we can do for remedying. It is still unpredictable at present.

We are always interested in new ideas and suggestions

A cup of tea is worth a thousand words

We can provide product catalogs and ordering arrangements

We are a team devoted to tea lovers everywhere